What is an AFDD and how does it work?

Not strictly a new invention, Arc Fault Detection Devices have been around for a little while. That being said, the requirement and importance of using them is becoming more recognised. To fully understand the importance of AFDDs and their use, let's take in in depth look.

Why would I need an AFDD?

To answer that question, first let’s make sure we understand the protection scheme for a domestic consumer unit.

An average domestic consumer unit tends to contain three main devices, a Main Switch, one or two RDCs and MCBs per circuit.

RCDs – Residual Current Devices – Most domestic fuse boards have at least one, if not two RCDs, each protecting a bank of circuits in the event of a line to earth fault, or earth leakage. Due to the way an RCD works, it takes a lot less current to cause it to operate as opposed to an MCB – this means that the RCB will usually operate first.

Main Switch - As the name suggests, this is the master switch for the consumer and all devices housed within it. Turn this switch off and all power is cut to the devices, meaning that all circuits protected by this consumer unit are now dead. Electricians will usually use this 'master off' when carrying out works in premises with which they are unfamiliar.

So what does this have to do with AFDDs?

Well… there is one kind of fault that none of the above devices protect against: electrical arcing within a cable or connection. 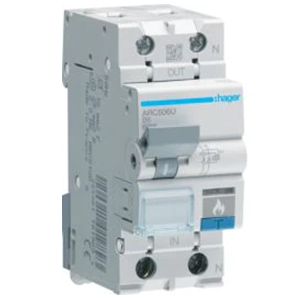 What is an Arc Fault?

An electrical arc is created when electricity jumps between two conductive materials within a non-conductive medium, ie: air. In low current instances, this is just a quick, small spark. However, if the current is high enough, sufficient energy is emitted to generate and sustain a proper arc. This isn’t to say that all arcs must be prevented, lots of everyday pieces of electrical equipment produce an arc during their normal operation; as an example, when you flick on a light switch in your home, a small electrical arc is generated between contacts. Likewise, an electric drill will create arcs inside its motor when in use.  In domestic wiring terms, an arc fault is where there is unintentional arcing in a circuit, allowing current to jump between two cable cores and can generate temperatures in excess of 6000°C - Plenty enough to start a fire.

Whilst fires in dwellings have decreased significantly over the past ten years, there are still a considerable number of fires which are attributed to electrical faults. In 2017/18, when the most recent regulations came in, there were 74,118 primary fires in the UK in that 12 month period, with 13,070 associated with electrical distribution or other electrical appliance faults. This is not to say that AFDDs would prevent all of these incidents, but it is likely that the number would be reduced.

Where could an Arc Fault happen?

The two most common areas for an arc fault to occur are cable terminations, where connectors are loose or not properly tightened, and within the actual cable itself, where the insulation within has been damaged.

The root causes for cable damage are pretty varied, some of the more common causes of damage are rodent damage, cables being crushed, trapped, twisted and improperly handled and damage to the insulation caused by nails, screws or being drilled through.

Loose connections occur most commonly in screwed terminations. There two main reasons for this; the first is incorrect tightening of the connection when installed. The second is by way of electro-motive force through conductors. This force, over time can actually cause connections to loosen because of the impact of the flow of electricity.

What is an Arc Fault Detection Device?

An AFDD is a device that is installed in your consumer unit to protect against arc faults. It does this by monitoring the waveform of electricity being used to detect unusual signatures that would signify an arc. When an arc is detected, power to the circuit is cut off and the threat of fire is minimised. They are specifically designed to be more sensitive to arcs than regular circuit protection devices.

Due to the internal components of an AFDD, they are a double width device, taking up the same two usable ways as an RCD or Main Switch.

What can’t an AFDD do?

AFDD’s have another blind spot – Ring circuits. A ring circuit, is, as the name suggests a circuit that forms a ring, starting and finishing at the consumer unit, they are commonly used in the U.K. The chances are all the sockets in your property are part of a ring circuit. The problem with ring circuits is as follows; you won’t know that the ring has a break in it. If the electricity tries to flow round the cable and comes to the break it won’t try and jump it and create an arc, it will take the long way round the rest of the ring. You’re not aware there’s a problem as all your sockets still work, the AFDD’s not aware there’s a problem as there’s no arc. Please note though this will only apply to a series arc fault in a ring circuit not a parallel arc fault.

What is a Parallel Arc?

A parallel arc fault is where the arc occurs between the line conductor and either the neutral or earth conductors. If an arc fault occurs between line and earth there is quite a high likelihood that the RCD will also operate.

What is a Series Arc?

Do I need to fit an AFDD?

While it is not currently a requirement to fit AFDDs in your consumer unit, it is a good idea and the current 18th Edition Wiring Regulations recommends they be fitted in the following locations:

As to whether you should have them fitted in your property, your best option is to speak to a registered electrician. Bear in mind however that they are very new to the domestic market and that it may take a little while for the electrical industry to get up to speed.